Due to the largely unwarlike incorporation of the Celtic kingdom Noricum the Danube became the northern boarder of the Roman Empire for almost 500 years- a border also between peoples and cultures.

From the north the Germanic tribe of the Marcomanni advanced to the Danube and displaced the Celts who had previously lived there. South of the Danube they got gradually Romanized. The neighborhood of Romans and Germanic tribes which developed on the new border lasted for centuries with alternating periods of peace and war.

Towards the end of the 1st century the Romans began to build the Limes in order to control and secure this very border. The Limes consisted of a chain of forts and military bases along the Danube which were connected by efficient roads. The so-called “Tullnerfeld” and the Vienna Basin were obviously considered particularly critical, as half of all the bases along the Austrian Danube Limes were located there. Large parts of the troops with a target strength of about 17,000 men were situated in the very area.

In the shadow of the military presence civilian settlements of the forts got established, numerous estates and the two large towns Ovilava (Wels) and Aelium Cetium (St.Pölten) developed in the hinterland. The forts formed the nucleus for numerous subsequent towns. The basic settlement and the traffic structure of the Roman period characterize the cultural landscape along the Danube to this day. 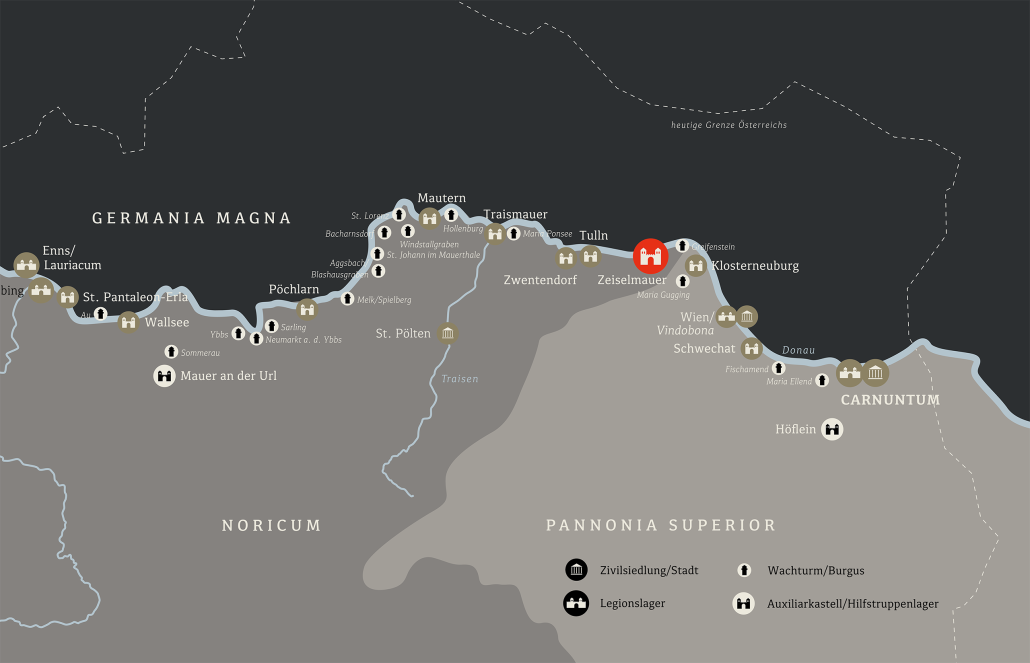 Around AD 80 Cannabiaca was built on a slightly elevated gravel terrace halfway between the neighboring camps of Tulln and Klosterneuburg. It hereby became the easternmost fort of the province of Noricum. With its size of about two hectares it was intended for a cohort, a unit of 500 men, a partially mounted auxiliary force which was subordinate to the command of the Second Italic Legion in Lauriacum (Enns). The ground plan of the camp has survived in the form of today’s church square.

Like all the other camps along the Limes Cannabiaca was first built by applying the timber-earth technique, a square of earthen ramparts with a timber palisade and a ditch in front. In the beginning of the 2nd century first the fortifications and then the interior buildings were rebuilt in stone. Architectural remains from this phase can be found in the Roman headquarter building located under the parish church.

In the 1st half of the 4th century the camp fortifications were substantially strengthened by massive corner and flank towers (fan and horseshoe towers). The northeastern fan tower located in today’s Römergasse is the only one still intact, whereas a remnant of the southwestern horseshoe tower is located under the primary school and therefore inaccessible.

In the 2nd half of the 4th century there was a profound change in the military structure at the Danube Limes. The standing troops were reduced and supplemented by a militia of farmers, who got transferred from the former civilian settlement into the interior of the camp. A small fortlet, the so-called “Burgus” was built at the north-west corner of the camp for the troops which had gotten reduced to about 50 men. At the same time the former eastern gate (porta principalis dextra) was replaced by a massive protective building (box gate) which to this day is known as ”Körnerkasten” (granary).

These monumental protective structures have been preserved and still characterize the setting of the village today.

The decline of the Western Roman Empire led to a dramatic deterioration of the situation at the Danube Limes in the 5th century. Rome had lost interest and ability of maintaining the military protection of the northern border. In 488 AD in a last major operation the remaining provincial Roman population was resettled to the south thus abandoning the province of “Ufernorikum” (Noricum ripense). If this had not happened the Romance language border would perhaps run along the Danube today.

The mention of a cohort commander (tribunus cohortis) in the Notitia Dignitatum written around 425/430 AD and a find of coins from the time of Valentinian III (425-455 AD) indicate that Cannabiaca (Zeiselmauer) was settled until towards the end of Roman times. After the departure of the Romans the place remained uninhabited until the 9th century. 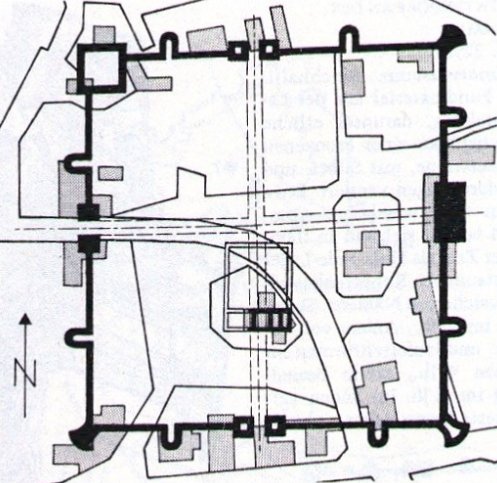 Two troop units from Cannabiaca are known by name and proven by finds:

The 5th Breucorian Cohort (Cohors V Breucorum) probably came from Pannonia and specialized in the development of military camps.  At the beginning of the 2nd century it was active at the Noric Limes at several sites, including Zeiselmauer, Zwentendorf and Wallsee-Sindelburg.

The 2nd Thracian Cohort (Cohors II Thracum) was probably the successor of the 5th Breucorian Cohort. Its existence is proven by the donation of the “devotion stone” in 164 AD. This is the only time the troop gets mentioned in Noricum. Its regimental history is impressive: Originally from Thrace (south-eastern Bulgaria) it was first stationed at the Germanic and Lower Rhine Limes, then in Britannia and afterwards it got transferred to Cannabiaca on the Danube Limes around the middle of the second century. About 100 years later it returned to Britannia where it can be traced until the collapse of the Roman Empire.

Aelius Aemilius, immortalized on a gravestone, was most likely a veteran of this 2nd Thracian Cohort- He was a Roman, his wife however, who also gets mentioned on the stele carries the Celtic name Amuca and is recognizable as a native by her costume. In the course of time the provincial Roman population developed due to such marriages.

Both stone monuments are on display in the Roman Showroom.

The identification of the Roman place name is not secured by an inscription find, but is based on the interpretation of the ancient place and distance information, which however is sometimes contradictory.  For a long time Cetium mentioned in the Itinerarium Antonini and in the legend about the life of St. Florian was assumed to be Zeiselmauer. At the end of the 19th century however it was recognized that Cetium was to be located in today’s St. Pölten.

Consequently Asturis mentioned in the Vita Severini was suggested as Roman equivalent to Zeiselmauer. This was also ruled out when brick finds in fort Zwentendorf made it likely that Asturis was to be traced there. So eventually it was decided that only Cannabiaca mentioned in the Notitia Dignitatum as the easternmost camp in Noricum could be considered for Zeiselmauer.

Early on in Zeiselmauer a Roman settlement was suspected, however not in the center of the village, but rather outside in the direction of St. Andrä. Remains of walls were often found there, which gave the area the name “Steinfeld” (stonefield) and were interpreted as relics of ancient Cetium. In the center of the village, on the other hand, no Roman buildings were suspected. The old walls and fortifications there had always been considered medieval and of little significance.

It was not until the 1960’s that it was recognized that the location of these buildings fitted into the ground plan of a Roman fort and that the old boundaries reflected its outline. Beginning in 1969, the Federal Monument Authority carried out numerous excavations, which confirmed the existence of the fort in the center of the village. The “Roman walls” were identified as a late Roman Burgus and the “Körnerkasten” (granary)” was proven to be an ancient box gate. Finally in 1981 the previously unknown Headquarter building with its flag sanctuary under the parish church was uncovered. The building remnants in the so-called “stone-field” could be assigned to the fort’s camp village.

A selection of the numerous finds of the excavations is presented in the Roman Showroom.

Zeiselmauer in the Middle Ages
Scroll to top