Zeiselmauer in the Middle Ages

After the Romans left in 488 AD, the Danube region of Lower Austria remained almost uninhabited for centuries. The Germanic Lombards migrating from the north reached the Danube around 500 AD and, according to their tribal tradition, settled for a short time on a field, which probably meant the Tullnerfeld, and finally migrated to the former province of Pannonia.

A short time later, the Avars appeared from the east and quickly subjugated the areas along the lower Danube. The Lombards left the land to them without a fight and departed in an orderly manner to the south. They conquered northern Italy and founded a kingdom whose name lives on in today’s Lombardy.

The Avars took possession of the area of the former province of Ufernorikum as far as the Enns, but settled it only as far as the Vienna Woods. The Slavs who migrated in their wake settled sporadically in the Danube valley.

The former Roman village of Cannabiaca was uninhabited for 300 years, its name forgotten. A layer of humus up to 80 cm thick accumulated in the ruins, in which no traces of settlement were found.

Charlemagne and the Colonisation of the East Country

In 791 Charlemagne set out to conquer the Avar Empire. He advanced eastwards along the Danube with a Bavarian-Franconian army and subdued the Avars without much difficulty. Their territory was incorporated into the Bavarian Duchy as the “Ostland”.

A large part of the sparsely populated region was given by royal donation to Bavarian monasteries and convents for colonisation and development. Only these had the necessary means, knowledge and also the necessary people. In the course of this colonisation, Bavarian settlers immigrated who soon mixed with the Slavs who had settled here. It is not atypical for the later Austria that the population of its heartland developed in this way.

Property of the Bishop of Passau

One of the monasteries that received donations was the episcopal diocese of Passau, to which the eastern Tullnerfeld was given in 836. The core of the settlement was the royal estate of Kirichbach (today’s St. Andrä v.d.H.), whose territory stretched between the present-day villages of Greifenstein, Königstetten and Langenlebarn.

While Kirichbach – St. Andrä became the parish centre, the administrative centre of the Passau dominion was established in Zeiselmauer. The still existing Roman camp fortifications made the place a welcome and secure settlement site. The Passauian retainer Zeizo settled here with his people and gave the place its name: Around 971 it was called Zeizinmurus (“Wall of Zeizo” – Zeiselmauer). The Court of Zeizo later became the manor of the Bishop of Passau, where the property administration of the “Hofmark” was located. The “Körnerkasten” was probably already used at that time to hold the tithe grain.

The entire area was called “Hofmark Zeiselmauer” from the 10th to the 15th century, by which was meant a largely autonomous economic and ruling area with its own jurisdiction.

The term “palatinate” was understood to mean a temporary decentralised seat of office in a large dominion. Since the Passau diocese extended to the Hungarian border and thus included the Babenberg residences of Klosterneuburg and then Vienna, the bishop often had to stay in this area. His manor in Zeiselmauer offered the opportunity to stay on his own territory, yet close to the ducal residence, and to conduct his official business here.

The oldest news of a Passau bishop staying in Zeiselmauer concerns St. Altmann, who was expelled from Passau, died here in 1091 and was buried in the monastery he founded in Göttweig.

Passau bishops were often art lovers and patrons. It is assumed that as early as the 10th century, Bishop Pilgrim had the record made of the collection of material in the Saga of the Nibelungs, which dates back to the Migration Period. As the supposed uncle of the beautiful Kriemhild, he had also assigned himself a role in the plot. This was the basis for the Middle High German version of the Song of the Nibelungs that we know today, which was written around 1200. Its author’s name is not known, but it is highly probable that he was at the court of the Passau bishop Wolfger von Erla. The journey of the Burgundians along the Danube is described with local knowledge, and Zeiselmauer also appears in it.

Through Wolfger von Erla there is also a very close connection to Walther von der Vogelweide, the most important German poet and singer of the Middle Ages. The latter stayed in Zeiselmauer on 12 November 1203 as a guest in the bishop’s palace. Wolfger presented him with “5 long shillings” (V solidi longi) as an honourary gift for the purchase of a fur. This corresponded to the equivalent of 150 silver pfennigs or about 200g of silver, for which a beautiful fur was probably to be had.

It is the only documented notice from the life of Walther von der Vogelweide, thanks to the Bishop’s bookkeeper who noted that expense and its recipient in the cash book.

A generation after Walther von der Vogelweide, Neidhart von Reuental made Zeiselmauer the setting for his satirical minnesongs. He brought the noble world of classical minnesong down to the soil of a coarse village society that thought it could imitate the chivalric virtues through new wealth. The peasants of Zeiselmauren came off so badly with Neidhart that – allegedly – after his death they visited his grave near St. Stephen’s Cathedral in Vienna and “stabbed it with spikes”. 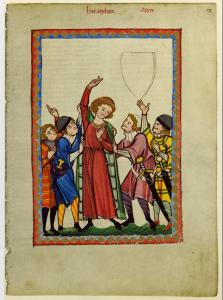 Neidhart defends himself against the Zeiselmaurer peasants harassing him.

The picaresque novel “Neithart Fuchs” was written in the wake of Neidhart von Reuental and also has Zeiselmauer as its setting. The peasants of Zeiselmauer are portrayed even more blatantly here than in the original. The most famous episode is the “Veilchenschwank”, in which a guileful Zeiselmaurer farmhand covers the first violet found by Neithart with a merdum and the duchess, proudly brought by Neithart to the violet festival, is confronted with this outrage. The “Veilchenschwank” became a piece of folk literature that is still alive today.

The fact that the Zeiselmaurer peasants came off so badly in these texts, which were very popular at the time, may also be due to the fact that the authors lived and wrote at the Viennese court, for whom the Passau bishop was already considered a “foreigner”, and with him his Zeiselmaurer subjects.

End of the Middle Ages

For a long time, the prince-bishop’s Zeiselmauer was the most important town in the eastern Tullnerfeld next to the sovereign Tulln. Towards the end of the 14th century it gradually lost this importance. Passau had to bow to the Habsburgs’ long-standing insistence on a bishop’s seat in Vienna and appointed a Passau vicar with an official seat in Vienna. The episcopal palace in Zeiselmauer had thus become superfluous. In 1415 Zeiselmauer also lost the Passau property administration, which was transferred to Königstetten, as was the district court later. The numerous and severe Danube floods, which frequently threatened the village, contributed to this decline.